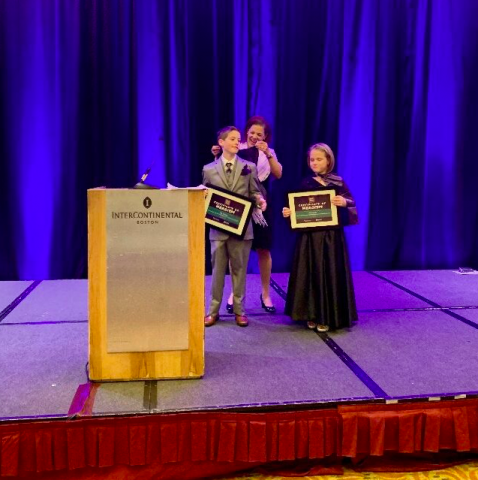 During a prolonged stay at a children’s hospital for his epilepsy, 12-year-old Cole was introduced to the idea of patients picking out socks as a keepsake. At a more recent visit, he was disappointed to learn that the hospital no longer offered this fun tradition. Knowing firsthand how picking out socks had been a highlight during his previous stays, he decided to do something. Soon, the “Cole’s Socks for Smiles” drive was put in motion. He set up a box at his town’s community center where people donated a variety of fun socks for children at his hospital. Cole’s act has inspired an enormous number of donations from the community. His initial goal was to collect 500 pairs of socks. He has exceeded his goal by collecting 42,000 pairs and counting! With the massive pile of socks growing every day, Cole and his mother,

Erica, plan to extend their list of donation recipients to the other local children’s hospitals. He is looking to reach 100,000 pairs of socks by the end of the year. Going above and beyond to bring joy to other people with epilepsy is why we are proud to name Cole as one of our Epilepsy Heroes!

In addition to playing hockey, soccer, softball, and basketball, nine-year-old Katie spent the past summer attending one of Epilepsy Foundation New England’s Purple Camps. These camps offer children with epilepsy and their families a wide range of exciting and engaging activities that they may not be able to take part in at a more traditional summer camp. Katie, diagnosed at the age of seven, had such an amazing experience meeting other kids with epilepsy and taking the time interacting in a fun tradition that previously seemed out of reach. Unfortunately, the cost to maintain the camp programs can be quite expensive. Katie wanted to help raise funds to support the camp programs and raise epilepsy awareness; she hosted a clothing and ketogenic food drive. Ketogenic food, which she learned about from a friend at camp, is a special diet that may help control seizures in some people with epilepsy. Katie is aware that ketogenic food can be costly at times and wants to bring attention to this issue as a part of her awareness campaign. As she continues to raise awareness about epilepsy and the dietary needs of certain people with epilepsy, her efforts have provided more than 224 campers the opportunity to enjoy everything that these camps have to offer. With Katie’s contributions to the epilepsy community, it’s easy to see how she won Miss Massachusetts Pre-Teen for the USA Ambassador Pageant. She is one of our Epilepsy Heroes, indeed!