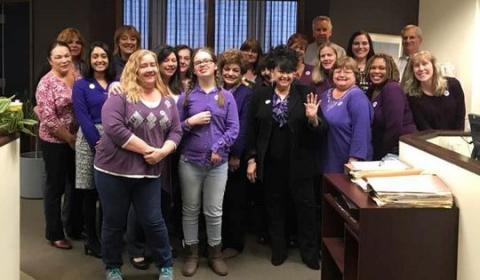 In Her Own Words: Mary-Ellen Hulse

I have worked at Doherty, Wallace, Pillsbury and Murphy, P.C. since 1990. In 2001, my daughter Sarah was born with Tuberous Sclerosis, a rare genetic disease in which non-cancerous tumors can form on the major organs (brain, eyes, heart, lungs, kidneys, skin).  Sarah was born with a large tumor on the right side of her brain and a couple of small tumors on her heart.  Sarah experienced non-stop seizures from one-half hour after she was born until she underwent brain surgery at 8 weeks old at Boston Children’s Hospital.  The surgery stopped the seizures for about 9 years, and then they came back with a vengeance in 2010, when she was 9 years old.  She suffered from seizures for about 10 months while we tried various medications, and then finally they were under control in December of 2010.  I am very happy to say that she has been seizure-free since December of 2010 and in December of 2016 we weaned her off of all of her anti-seizure medications.

Doherty, Wallace is like my second family.  Everyone has always supported my family and the tough times which Sarah has gone through. In 2011, I asked if we could celebrate Purple Day on March 26th to bring awareness to epilepsy. The firm was thrilled to help. Since 2011, we have been having “Purple Day for Epilepsy Awareness” every March 26th, where everyone in the firm, including all of the attorneys, wears purple and makes a donation to the Epilepsy Foundation. We then have a pizza party and Sarah comes in and sees how everyone wears purple for her.  It is a great day and the firm has really come together to show their support.

EFNE Note: This year's drive raised $370 for EFNE: Thank you! If you would like to hold a DIY Fundraiser, please learn more by clicking here.