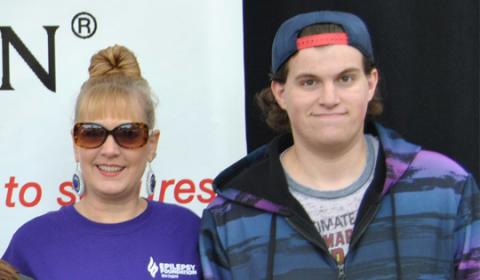 Cumberland mother embraces son with epilepsy and his unique abilities

These are three words that all mothers dread hearing, particularly when they are 1,300 miles away from a child in trouble.

This is what Lisa Phillips faced when Robbie, her nine year-old son, was with his father in Tennessee attending a world motorcycling event. Lisa was home caring for their infant son.

Lisa’s then-husband, Tim, informed her that Robbie had gotten out of the shower in their hotel when he began to have a seizure. Tim immediately called 911 and Robbie was taken to a local hospital. Lisa was relieved to hear that the attending doctors believed it was an isolated incident, perhaps brought on by dehydration because of the three-digit temperature and humidity. When they got home, Lisa immediately called Robbie’s pediatrician, who scheduled an appointment with a neurologist, and everything seemed fine. Within a few weeks, however, it became evident that something was wrong because Robbie began to have other episodes. Concerned and scared for her son, it wasn’t long before Robbie was diagnosed with epilepsy.

"Everything changed at that point," Lisa says. "And the indoctrination into the world of epilepsy began: the learning, the research, trying to figure out what medications work and which ones do not."

Epilepsy is a neurological disorder characterized by abnormal electrical firing in brain cells. This disruptive cell activity can cause recurrent seizures, symptoms of which can vary widely, from staring off blankly for a few seconds, to sporadic twitching of arms or legs, to brief loss of consciousness.

Epilepsy is more prevalent than people realize, affecting 65 million people worldwide, 3 million in the U.S. In fact, one in 26 people will develop epilepsy at some time in their lives, with nearly 10 percent of all individuals experiencing a single unprovoked seizure. Someone is said to have epilepsy if they experience two or more unprovoked seizures separated by at least 24 hours. The cause of epilepsy is unknown and there is no cure.

"You have to change," Lisa says. "You have to learn to let go as a parent. I had to let go of the ideal I had in my head about who my child was and what he was going to do. We embraced Robbie for his unique abilities, and he really has done amazing things."

As Lisa lists his achievements and accomplishments, you can hear the pride in her voice. Robbie has gotten involved with numerous organizations, including the National Epilepsy Foundation. Through this participation, he has able to make strong connections with other children. These relationships have made a world of difference in his outlook and how he perceives himself. Every year, the organizations host the Teen Speak Out Conference in which a teen from each state is nominated to attend and kids with epilepsy are together and interact with one another. They learn how to advocate and learn about public policy and how to communicate with their legislators.

"It’s an amazing and empowering event for these kids," Lisa says.

Robbie is 19 now, and he has been living with epilepsy for 10 years. He was diagnosed three months before his 10th birthday. Up to that time, he was a champion motorcycle rider, ranked first in New England and third in the country in his age category.

"You have to redefine your life," Lisa says. "And for Robbie, he had to redefine who he is as a person. Before the diagnosis he was a young, but accomplished motorcyclist. That’s what he was known as, then suddenly he couldn’t do that anymore, obviously, from a safety perspective."

Robbie experiences several different types of seizures, including Juvenile Myoclonic Epilepsy (JME), which is the most common of the generalized epilepsy syndromes to emerge in mid-to-late childhood. It is characterized by the presence of absence seizures, formerly called petit mal seizures, myoclonic seizures and generalized tonic-clonic, formerly called grand mal, seizures. Robbie would also have what is known as cluster seizures, where he would go up to six months without a seizure and then for the next several months he would have them regularly, sometimes 10 to 12 an hour.

"Robbie doesn’t know when he's going to have a seizure," Lisa says. "He just drops. And of course the older you get, the bigger you get, the harder you fall. Robbie’s broken teeth, bloodied his nose, gashed his head, given himself black eyes. Literally, after having a seizure it looked like he's been beat up on occasion."

Unfortunately, even in this day and age, there is a stigma attached with having epilepsy. Having had seizures on the bus and at school, right away Robbie’s peers treated him differently. One thing about epilepsy is that it is an extremely isolating disorder, and severe depression is common.

"Probably the most difficult thing for me," Lisa says, "was seeing my son ostracized by his peers. Kids can be cruel, and anybody that's perceived as a little different is made fun of and bullied. Robbie struggled individually. I struggled as a parent. My husband and I struggled as a couple. We struggled as a family. At first, we were all in such a state of shock, we really didn’t know what to do."

One of the first things Lisa did for her son was to get him into counseling, and found an intensive program that was run through Hasbro Hospital. It was designed to help teach children who are going through a chronic illness how to get a handle on their medical diagnosis and how to cope with their emotions and other issues they might be having.

"Like all teens, Robbie just wanted to be typical," Lisa says. "And despite me telling him all the time, 'Who wants to be typical? You’re unique. It’s better to be unique,' it’s a tough sell to a 19 year old."

Robbie is far from alone. Of the 150,000 new cases of epilepsy each year in the U.S., approximately 50,000 will be diagnosed in children and adolescents under the age of 18. The incidence of epilepsy is higher in young children and older adults, affecting both males and females equally.

"I know a lot of parents fall into depression themselves, and I can understand that, but I’ve always said I don’t have time to be depressed," Lisa laughs. "I’m too busy with everything going on with my children. I always believed I was a strong person, but you realize you’re stronger than you think, and you do what you have to do."

Never very politically active herself, Lisa now is involved in many political spheres, serving on various councils and boards because it’s what her son needs, and it’s what she needs.

"I guess my message to anyone being diagnosed with epilepsy, or any chronic illness, is to educate yourself as much as you can,” Lisa says. “Don’t be afraid to ask questions. Find a support group with like-minded people. And advocate, advocate, advocate, bringing awareness to whatever cause it is you’re fighting for. And in terms of your children, nobody is going to advocate for your child more than you are."