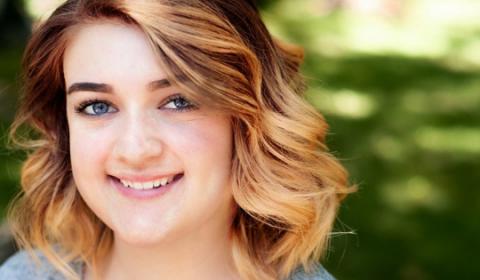 I recently had the pleasure of speaking with Gracelyn Rennick; an accomplished 17 year old singer/songwriter, pianist, guitarist and actor from Rhode Island.

Gracelyn has lived with epilepsy since she was 12 years old and, in spite of the challenges of living with seizures and other chronic conditions, she is a determined young woman who focuses on her talents and her desire to “make a difference”.

Gracelyn says “There is a stigma that shouldn't exist with epilepsy” To help raise awareness and acceptance of epilepsy Gracelyn has agreed to serve as a Teen Co-Chair for the 2016 Rhode Island "Walk this Way" Walk for Epilepsy along with her friend Robbie Thorp. This year’s Walk Chair is Christina Vilardi and our Honorary Chair is Congressman David N. Cicilline.

In addition to her singing career, Gracelyn has appeared in movies including “Zoo Keeper” and “Grown Ups”, both with Adam Sandler and Kevin James.

Her first CD “Saving Grace” was released last year (2015) and her new single “Like the Stars” is now available on iTunes.

To find out more about Gracelyn and her upcoming events visit her Facebook page. And you can support her for the RI Walk for Epilepsy on her First Giving Page.

Hi Gracelyn, thank you for taking the time out of what must be a busy schedule to speak today. After listening to your CD “Saving Grace” for the umpteenth time I have to ask, Where do you get your inspiration for your music?

“It varies between songs. Sometimes I write about real life situations that I have been through and express my feelings that way. But there’s also times where I make up stories and write songs about them. Or I get ideas from movies. But all in all, every song I write relates to me in some sort of way, just sometimes the message is deeper hidden than in other songs.

At 17, you’ve already had a great deal of success. What have been some of the highlights of your career to date?

“I think my most recent highlight would be my release of my single, “Like the Stars”, which just came out on August 8, just in time for my birthday! I am so proud of this song as a whole and how it came out. I think, also, one of my biggest highlights was when I played a show at the House Of Blues in Boston, Mass. I was taking a 6 week program there called “Bringing Down the House” where we learned about stage presence, social media etiquette and how to present yourself as a professional musician. And at the end of the class we did a show at the House of Blues which was insane considering the amount of incredible musicians and bands that have played on that stage before”.

Being diagnosed with epilepsy at age twelve had to have quite an impact upon you.  What challenges did that have upon you and your family?

“I think one of my biggest challenges, personally, would be the fact that I was afraid to go out and do anything because I might have a seizure. I lost a lot of friends, and I got pulled out of school to be home-schooled, so that in turn also basically changed my life. I went from being the most social, outgoing, artistic kid, to being a quiet, sick kid who was afraid to do anything. And I think that was also hard for my family as well, because they knew that this wasn’t ME. This wasn’t the person that they knew before I started getting sick. And there was really nothing they could do about it. How that turned around was I started getting into music. If I hadn’t started playing, writing and performing, I would probably still be that miserable kid. But I realized there’s more to life than feeling bad for yourself, so I got out there and made the best of my life.”

Do you feel your epilepsy impacts your music or other goals?

“I think being sick really helped me find my music within me. You see, I don’t just have epilepsy, I have multiple chronic illnesses. If I hadn’t gotten sick and had to be at home all the time, I wouldn’t have picked back up my guitar that I gave up at age 11 and I wouldn’t have written my first song and I wouldn’t be where I am today. I strongly believe that everything happens for a reason and there is a reason I got diagnosed with epilepsy and there is a reason I am a performing musician and singer/songwriter. To share this with the world. So, yes, I do believe that Epilepsy impacted my music and goals but in a positive way”.

What advice would you give to other teens living with epilepsy?

“My biggest piece of advice is to not let your epilepsy hold you back from doing things that make you happy. I learned that kind of late in the long run, but it’s the most honest, real and impactful advice I can give”.

We are thrilled to have you as a Teen Co-Chair for this year’s RI Walk for Epilepsy. Your help certainly raises public awareness about the disorder. What would you like the public to know about epilepsy?

“I would like the public to know that epilepsy changed my life. But it also made me a stronger person and made me value the people around me. It pushed me to go for my dream, and in turn I think that’s a pretty good thing. I would also like folks to know that epilepsy is a very common condition. 1 in 26 Americans will develop epilepsy so I would encourage people to learn about epilepsy and to learn how to respond to someone having a seizure and to accept and support people who have epilepsy”.

How can other teens join you to help raise awareness about epilepsy?

“If you are in the New England area, you can join me on the walk on October 30 at Slater Park in Pawtucket, Rhode Island. You can also join my team to donate to the walk. You can contact me directly at gracelynmusic@yahoo.com so I can give you information on how to do that. I would love to meet other teens living with epilepsy and this would be a good place and fun time to do so”.

So, what’s next for Gracelyn Rennick?

“Well, this is my first year not having to go back to high school in the fall. I will be focusing on my music full time and trying to do tons of shows and maybe eventually end up in Nashville or LA. But more currently, I will be going to Nashville for an award show where I am nominated for 4 different awards and I am SO excited for that”.

Well Congratulations on your nominations. And, “Thank You” again Gracelyn for your time today and for your support and dedication to the Epilepsy Foundation. We look forward to hearing more great music from you in the future and to following you at events throughout the region. Again, you can follow Gracelyn on her Facebook page and at her website gracelynmusic.com.