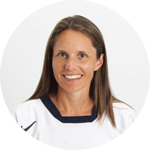 Chanda Gunn is an accomplished ice hockey player known for overcoming obstacles on and off the rink. When she was nine, she was diagnosed with having both absence and grand mal seizures which were controlled with medication. Unfortunately, she experienced a series of tonic-clonic seizures and had to drop out of college to regain control over her epilepsy. Through hard work, she returned to the ice spending her college tenure at Northeastern University and leading Team USA at the Olympic Games.

Today, Chanda lives an active life with her family. She continues to battle epilepsy but never lets it defeat her.  She now controls her epilepsy with the ketogenic diet and is an advocate for using dietary therapy as treatment. She is heavily involved in charity work, passionate about her work with NYU's FACES and wearing many hats across the country as an Epilepsy Foundation of America spokesperson. Chanda is dedicated to her work with the Young Leaders Network and Kids Connect. Chanda believes people living with epilepsy should support one another and encourages the community not to let seizures discourage them from chasing their dreams.